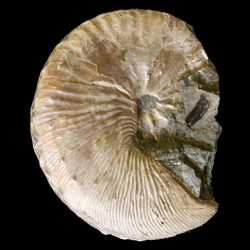 Original Description from Owen (1852; Report of a Geological Survey of Wisconsin, Iowa, and Minnesota):

Specific character.—Shell compressed and slightly boat-shaped. One volution visible, the rest concealed in the outer chamber. Surface ornamented with slightly curved costae, which, on the chambered portion of the shell, are more than twice as far apart as on the terminal, deflected, non-camerated part. Every second or third rib runs to the inner margin ; the intermediate ribs are formed by bifurcations, which commence one-fourth or one-half the distance towards the periphery. A row of small, pointed tubercles, on either margin of the flattened dorsum ; a row of flatter and more obscure tubercles, one-fourth of the distance from the inner margin of the convolutions.

Dimensions.—Longest diameter, three inches shortest, two and a half; greatest thickness, 7/10 of an inch. inch.