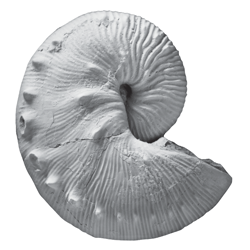 Kansas to Alberta and Saskatchewan.

PaleoDB taxon number: not in database.

Shell longitudinally-oval, moderately convex; volutions generally higher than convex, inner ones forming a considerable portion of the entire bulk; deflected or body-portion moderately high, but short, or only becoming a little free at the aperture; periphery rounded throughout; umbilicus small ; aperture oval-subquadrate, being higher than wide, and more or less sinuous on the inner side; surface ornamented by small, bifurcating costae, that are somewhat flexuous on the sides, but become even and nearly straight on the periphery; each side of body-portion also bearing near the periphery a row of rather prominent, subquadrangular nodes, and a few smaller ones along about one-third the height from the umbilicus.

Septa divided into rather deep lobes and sinuses; siphonal lobe longer than wide, nearly oblong in form, and provided on each side with two principal slender branches, the two terminal of which are parallel, longer than the others, and each subdivided into two unequal, sharply digitate branchlets, while the others are scarcely more than sharply digitate; first lateral sinus almost as long and wide as the siphonal lobe, nearly oblong in form, and deeply divided into two unequal, variously sinuous and subdivided branchlets; first lateral lobe narrower and shorter than the siphonal lobe, and provided with two nearly equal, bifid, and sharply digitate terminal branches, and on each side, with one much smaller, merely tridentate, lateral branch; second lateral sinus much smaller, and proportionally narrower than the first, and nearly equally divided into two deeply sinuous and more or less subdivided terminal branches, with some smaller, nearly simple; lateral divisions; second lateral lobe not more than half as long and wide as the first, but very similarly branched; third lateral sinus much smaller than the second, and divided at the end into two equal, slightly sinuate, terminal branches, with some small, obtuse, lateral projections; third lateral lobe not larger than one of the terminal branches of the second, and trifid at the end, the divisions being very small and nearly or quite simple. Farther in there is, a minute, simple projection, that probably represents the minute fourth lobe in some of the other varieties.

This shell differs from Dr. Owen's type of his S. nodosus, in having its non-septate deflected portion of the last volution much shorter, and its inner volutions more compressed, while the nodes near its umbilicus are decidedly smaller. I have not had an opportunity to compare it with Dr. Owen's type specimen, and his figure of a septum of the same is evidently not drawn with sufficient completeness and accuracy of detail to afford a satisfactory means of comparison of internal structure. Nevertheless, from the similarity of form and ornamentation, I cannot doubt that our shell is not more than a mere variety of the same species.

On comparison with foreign species; our shell will be found to resemble so closely some of the European forms referred to S. constrictus. Sowerby (see Descrip. des Moll. Foss. Craie des Env. De Limbourg, pl. v, fig. 2, by Ernest Favre), that there really seem to be scarcely any external characters by which it can he distinguished. Indeed, I am much inclined to think there is really no well-defined specific difference, though I have no knowledge of the nature of the septa in the forms figured by Favre. D'Orbigny figures a much more compressed shell in the Paléont. Fr., Terr. Crét., I, pl. 129, under Sowerby's name S. constrictus, which, with the exception of its greater compression and smaller size, also nearly resembles some specimens of that under consideration in general appearance. His illustration of a septum of a French specimen, however, will be seen to present rather marked differences from those of all the varieties of the American forms, particularly in the possession of a greater number of the small inner lobes.

When we take into consideration the variability of these shells, however, as known here, there are certainly some reasons for believing that the whole series might, without impropriety, be included as varieties of S. constrictus. As Dr. Owen has, however, already separated one of these shells under a new name, I prefer to retain this arrangement until a good series can be compared with the European species.

Dr. Owen's type should also be compared with S. compressus, of Roemer, which seems to be a similar, but doubtless distinct species, if accurately figured.

Locality and position.--Dr. Owen's type-specimen came from near Cheyenne River, Dakota, where it was found in the upper part of the Fort Pierre group. Ours is from the same horizon on Yellowstone River, Montana, 150 miles above its mouth.