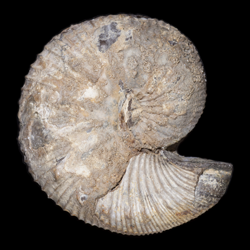 "Shell moderately large, stout, and tightly coiled, with small umbilicus. Last septate whorl considerably depressed, with broadly rounded venter and more sharply rounded flanks. In side view both the venter and umbilical shoulder of the living chamber are evenly curved; in cross section the venter is well rounded, the flanks are flattened and round gradually into the convex, steeply sloping umbilical wall. The living chamber tapers slightly toward the nearly circular aperture. The holotype is 64.5 mm. long, 64 mm. high, and 35 mm. wide.

The innermost whorls were not seen. The early part of the last septate whorl is coarsely ribbed but changes abruptly to fine, dense ribbing. The ribbing widens on the proximal half of the living ctiamber and then gradually becomes denser toward the aperture. On most of the shell the primaries are fairly straight but near the aperture they become broadly curved and inclined forward. On the older three-fourths of the living chamber each primary ends as a conical ventro-lateral tubercle. The ventral ribs on the living cham- ber are straight on the older part, but arch gently forward on the younger part. They extend well down between the primaries. Four or five are present for each primary on the middle part of the living chamber. On the exposed whorls, the holotype has 27 primaries and 104 secondaries with 17 primaries and 67 secondaries on the living chamber.

The suture is complex and characterized by trifid lobes.

The well-rounded venter, denser costation, and intercalation of secondary ribs between the primaries readily distinguishes this species from Clioscaphites vermiformis and C. platygastrus. It is a transition species between C. vermiformis and Desmoscaphites erdmanni Cobban, n. sp.