Bryozoans are often colonies of small cells called zooids which are filter feeders. They encrust on hard substrates, which includes rocks, corals, and even hard shells of other creatures. The mineralized crust or film they form is often found on the surface of marine mollusk fossils. 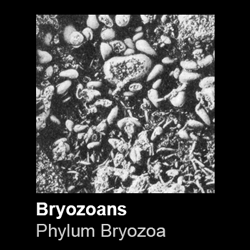