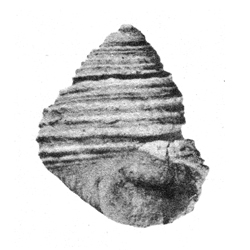 Key morphological features: The Turbinidae are small to medium-sized gastropods with globose, turban-shaped, solid shells. Whorl shoulders can be prominent or indistinct depending on the species. The spire is of medium height and there is no siphonal canal and the shell exterior is smooth in some species, while in it exhibits spiral cords with or without broad triangular spines or elongated knobs. The aperture (opening) is subcircular and broad. This group has a calcareous operculum, or plate that covers the opening.

Paleoecology: The Turbinidae are marine gastropods found in a variety of habitats including rocky, hard substrates, sand, and grass habitats, but predominantly those in which the substrate is calcareous. They are found at depths from the intertidal zone down to at least 500m at tropical to polar latitudes worldwide.